Beyond The Salary: The Competitive Benefit Landscape

As the IT job market continues to thrive in 2015, you will continue to see a larger redistribution of leverage from employers to job seekers. If you are like many organizations, landing top-tier tech talent has become an increasing challenge, with qualified candidates often requiring a lucrative compensation, along with competitive benefits and perks. Human resource teams and IT hiring managers are finding themselves in an ecosystem filled with high-caliber candidates unafraid to reject a job offer, and are struggling to find ways to differentiate their organization and secure highly-qualified new hires.

Understanding the Current IT Ecosystem

In the long history of labor forces, there perhaps has never been a more demanding candidate pool than today’s technology workers. In fact, by 2020, the U.S. Bureau of Labor Statistics projects one million programming jobs in the U.S. will go unfilled.

Understanding the marketplace and the dynamics within can be crucial when attempting to land top-tier talent. The technology field is booming, the Internet of Things is proliferating software into entirely new arenas, and hiring managers are experiencing the increased expectation and heightened demands resulting from a candidate-driven market.

Elements of an Effective Job Posting 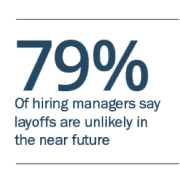 Rapid advancements in technology and the IT industry as a whole, require tech professionals adapt to new software, apps, systems, platforms, services and more. However, those who can keep up with the pace, gain experience and prove their technical worth are highly coveted and richly rewarded – usually in ways that other labor groups are not, especially where benefits are concerned.

Packing on the Perks

With the fierce competition between organizations and candidates alike, meeting the needs of the best applicants is becoming about more than just salary. While this is ultimately a primary driver in determining employment, many companies and hiring managers have not adjusted hiring budgets accordingly to address this growing reality. In response, companies are becoming progressively creative with incentives and perks designed to entice talent to join their organization.

In addition to the list of non-traditional benefits for which technology companies have become famous (free drinks, food and even dry-cleaning have become standard), below are some perks which are becoming increasingly common (according to a Silicon Valley Business Journal study of data from the Society for Human Resource Management):

Many of these perks and ideas are worth your company’s consideration, however, it’s easy to overlook other existing elements of your organization that add value to potential candidates. For example, enthusiastic team members, cutting-edge projects, well-structured advancement plans and social conscience are all compelling elements to emphasize during the hiring process.

In our blog, IT Hiring: The Art of Company Positioning, we take this idea further and provide actionable insight into presenting your company to the IT talent pool, and making your organization a competitive destination for technology talent.

Download the series Defining the IT Labor Ecosystem to gain valuable insight into the current technology workforce.