Greater dependency on technology to create new products and the increasing need to get these products to the market faster is pushing companies towards automation. Agile methodologies and rapid development cycles in application development have become a must for companies to reach ahead of others. Automation testing is one such process that has made product and application development faster and easier across different browsers, devices, and operating systems. The market is full of several test automation tools in the market, which promise to enhance product performance, save costs, and make employees more productive by freeing them from routine testing processes. 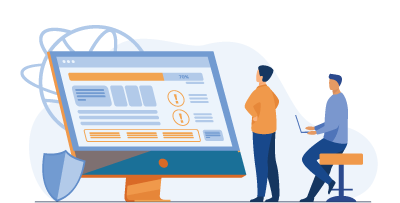 Automation testing does not exactly replace manual testing but makes testing more repeatable, faster, wider in scope and depth and executable for complex test cases that run into thousands. Automation testing eliminates human errors, can simulate hundreds and thousands of users, and can prevent errors at the development stage itself.

RPA or Robotic Process Automation, on the other hand, is automation of repeated processes using advanced technologies like AI. RPA and test automation are two very distinct processes with different but related applications in the field of testing. This blog tries to clarify how these two different technologies can be used to create fail-proof applications quickly and at a lower cost.

RPA may sound futuristic, but it is actually present in every application on our mobile phones or computer in the form of chatbots or form processing or online registrations. RPA is the use of robotic tools to reduce human intervention in certain processes or operations within an organization. RPA mimics human abilities using AI with a computer interface or any software application to do certain operations such as inputting data, collecting information, or executing a workflow process. More and more companies are using RPA in some form or the other in their regular operations because it allows greater efficiency and accuracy, cost savings and increases compliance. As a result of automation of monotonous tasks, employees have more time to focus on strategic operations.

In short, RPA can be used to:

Some areas in which RPA can be implemented:

Are RPA and Test Automation Similar?

Use of RPA tools in certain kinds of testing processes such as regression testing or GUI test automation also has the same advantages as in other areas: it increases productivity, reduces errors, lowers costs, and helps to maintain compliance. It is a particularly useful tool to replace manual testing that is repetitive, time-consuming and rules based.